In true Westport tradition, FAR NIENTE has been designed to offer the very best of the good life at sea with its contemporary profile and refined interior spaces. A few custom features separate Far Niente from other 130’ Westports on the market: one of the twin staterooms can convert to a 4th King; and the custom dining area forward on the Portuguese bridge with umbrellas and chaise lounges. 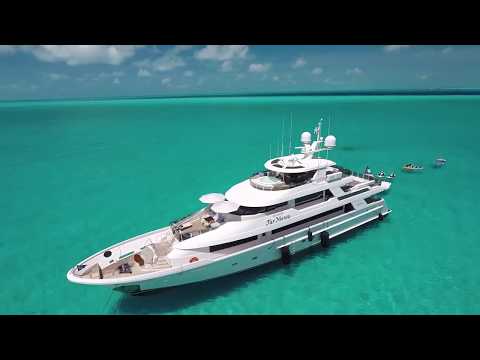 Far Niente in the Bahamas

Mathew was born in Kimberly, South Africa and raised in the wine district of the Western Cape. He has been diving since I he was 12 years old and has always had a big passion for the ocean and the underwater world. He has worked in Mozambique as a Dive Instructor before deciding to join the yachting industry four years ago. He loves instructing and showing people how to enjoy all the fun things there are to do in and out of the water.

Mary was born in Savannah, Georgia surrounded by the intercostal waterways of the Atlantic Ocean. Growing up in the southern low country she developed a passion for nature and a resolve to explore the world. After graduating with a Biology degree she worked in the equestrian industry before beginning her yachting career on a busy dual season charter yacht called Australis. After more than two years of cruising the Mediterranean, Caribbean and Asia she took a sabbatical from yachting to experience wild Africa. Her new job involved working for a company that ran luxury eco-lodges from the Bazaruto Archipelago of Mozambique to the banks of the Kalahari in Botswana, here she used the experience she had gained from yachting to provide a high level of hospitality offering silver service in some challenging bush environments. In 2017 Mary returned to yachting on Far Niente where she met her husband Matt, and hasn’t looked back since! With a keen eye for detail she quickly became Chief Stewardess and will cater to your every need and comfort, making an epic holiday with memories that last a lifetime.

Lindsey was born and raised in Arizona. She previously worked as a trainer Jockey for a horse track but her love for the water convinced her to make a change into the maritime industry. She has been in the maritime industry ever since, 13 years now and counting. She gained much experience as a dockhand at a marina and from working at a boat & jet ski rental company. From there she decided to take her career further and worked onboard a dive boat while obtaining her captains license. With her passion of the ocean and determination to make every guest have a blast onboard, you are guaranteed to have a trip to remember onboard M/Y Far Niente!

Danielle grew up on the south shore of Long Island, NY where she spent summers boating, crabbing and clamming on the Great South Bay. While attending Stony Brook University pursuing her degree in English, she began working at Sailors Haven Marina on Fire Island. It is there that she fell in love with the boating industry and knew that working in and around boats is where she belonged. She spent the next six years working at different marinas from Fire Island to Montauk. Upon graduating college Danielle spent a year traveling through Latin and South America. She spent six months teaching English as a Second Language in Costa Rica and had the privilege of traveling to Nicaragua, Panama, Peru and Bolivia. Her zest for travel and her prior boating experience made joining the yachting industry a perfect fit. Danielle joined the yachting industry in 2018 and has gained experience on both motor and sailing yachts. Her easy-going attitude combined with her passion for service will put you at ease and ensure you have a wonderful experience!

Born in Florence, Italy Chef Massimo grew up around traditional Italian cuisine, this allowed him to learn baking and pastry skills at a very young age. In 1989 at the age of 15 he began his career in the restaurant industry. Since then he has held positions in several of the world’s top restaurants, working most recently for Sheikh Mohammad bin Salman at the Royal Palace of Saudi Arabia.

Massimo is no stranger to working on yachts, he has held the position of Head Chef on the 295ft Super Yacht Lauren L, the 247ft Boadicea and the 237ft Legend, catering to past Presidents, Royal family and several of the most prominent names in Hollywood & Corporate America.

As a culinary trained Chef with over 29 years of experience Chef Massimo is able to custom design menus taking into consideration the dietary requirements and specific tastes and needs of his guests.

Everything in his galley is carefully made from the most basic of ingredients making all pastry and bakery, ice-creams and fresh pasta in house. Even the nightly turn down Chocolates don’t escape his artisan hand with newly invented fillings formulated for each and every charter.

Josh grew up in Sarasota Florida where he developed a passion for boating at an early age. He began sailing dinghies as soon as he could, joining the Opti national team at eleven and continuing to race and coach before his beginning his yachting career. Josh is an avid fisherman and also enjoys traveling, diving, spearfishing, and other watersports. From repairing and maintaining his own boats and a fleet of coach boats, he developed an interest in all things mechanical which led him to pursue engineering. He has been in the yachting industry for 8 years in a variety of engineering roles earning his Y4 license with the MCA in 2019.

Jonathan (Jon) grew up in Durban, South Africa and fell in love with the ocean from a young age. When he wasn’t on his family’s 38ft Luhrs Sport Fisher you would find him surfing or wake boarding in Durban’s warm ocean. After Jon obtained his diploma in Hotel Management and Hospitality he dove headfirst into the service and tourism industry, and eventually lead him into the direction of a yachting career in 2013. He has progressed in his professional yachting career and in 2017 stepped up to the role of Captain.

Jason started his life on the water at the age of 5 racing small sailing dinghies. After racing for a number of years he taught these skills at the Olympic sailing school in Wales. At the school, he passed his Master of Yachts unlimited and with such credentials was able to join the Americas Cup Yacht, Stars & Stripes. With a passion for travel working on super yachts seemed a natural progression. Since then he has worked on multiple yachts and has 17 years of experience in the industry.

As a captain, he oversees every aspect of the yacht’s operations ensuring safety at all times and a comfortable cruising experience. He is adept at crew relations, continually maintaining a strong team environment to create the most memorable and service-oriented experience for the guests.

Jason would like to take this opportunity to welcome you aboard M/Y Far Niente and introduce you to the rest of the crew: