Operating in the Caribbean and the West Mediterranean

AURELIUS  is a stunning beauty. Dutch-built and delivered in 2011. AURELIUS is recognized for her unique mixture between style and performance. Sailing her is cruising in the tradition of the 'Grand Classics' with the performance of a modern super-yacht.
With her open-plan accommodation, AURELIUS becomes a real home away from home. Offering an overall theme of subtle Honduras mahogany and cream paneling with chestnut flooring, she evokes elegance and style whilst allowing an informal atmosphere.
Built at JOM (Jacht Ontwikkelings Maatschappij) in 2011 & designed by Dykstra as “modern classic” sloop she is truly a masterpiece of Dutch naval architecture & yacht construction. Maintained in top condition AURELIUS has an overall length of 33.9 meters / 111 feet. AURELIUS comfortably accommodates six guests in a master cabin with Queen bed & ensuite bath. The two guest staterooms each have twin beds plus a Pullman berth & ensuite bath (head & walk-in shower). The Starboard guests cabins has a sliding system to enable the beds can convert from two twin beds to a Queen bed. Crew quarters are seperately accessed forward in two crew cabins, accommodating up to three crew, with seperate crew head and shower. AURELIUS is fully air-conditioned throughout.

Harry is from the south coast of England and has been sailing from a young age. After graduating from University with a Business degree in 2010 the call of the ocean proved too great. He met Freya at a sailing school in Portugal and he has been sailing professionally as a captain ever since. He holds an MCA 200-ton Master ticket in addition to his Yachtmaster.

During his 11 years at the helm, he has cruised throughout the Mediterranean from Mallorca to Mykonos, every island in the Eastern Caribbean, and up and down the East Coast of the US from Florida to Maine. In addition to 7 charter seasons, he has crossed the Atlantic under sail eight times and completed two crossings of the South Pacific culminating in over 100,000 sea miles.

Highlights from his career include traversing the Panama Canal, diving in the atolls of French Polynesia, swimming with humpback whales in Tonga, superyacht racing in the Caribbean and, of course, summer sunsets in Newport.

Harry and his partner, Freya, look forward to providing a first-class charter experience for their guests aboard AURELIUS. 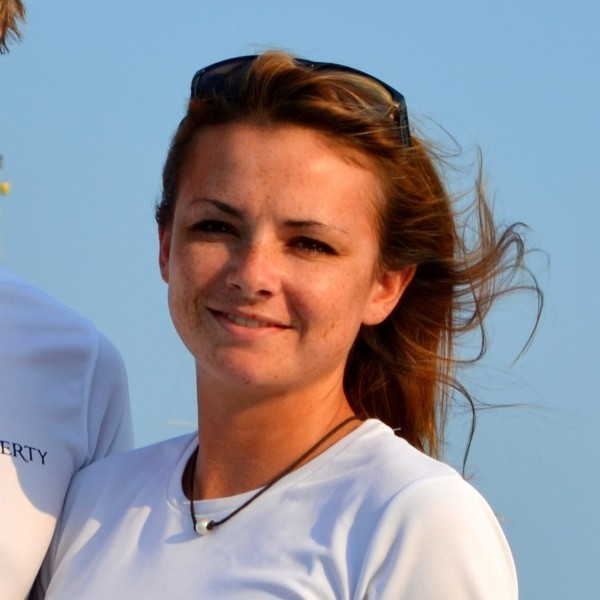 Freya has been working alongside Harry as Chef and Stewardess since their career began back in Portugal in 2010. Freya is from a sailing school family who are based in the sunny Algarve and was trained by her fastidious father. She also holds her 200-ton Yachtmaster’s license.

Since working on various private and charter sailing yachts she has pursued culinary training at the prestigious Ashburton School of Cookery in South England. Her cuisine has diversified through sailing trips through the Med, Caribbean and been influenced by the culture found in the South Pacific.

Freya is also passionate about sailing and helping out on deck and her professional experience has allowed her to become a versatile ‘all-rounder’ who can jump into any task. With exceptional attention to detail and her friendly demeanor, Freya looks forward to hosting you aboard AURELIUS.

Her length of 33.9 m comfortably accommodates six guests in a master and two twin staterooms plus two Pullman berths, with two crew cabins forward accommodating up to three crew. All guest cabins have ensuite heads with full walk-in showers. Separately accessed crew quarters for 3 with head and shower.
The two guest cabins each have a sliding system to enable the beds to be pushed together to form a double. We have successfully combined the bunks in the port guest cabin on several occasions